"Crash The Tea Party" is Crashing 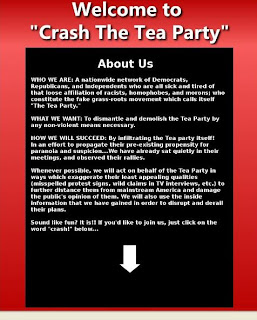 Left Coast Rebel has a post up about a site called Crashtheteaparty.org. Seems the topic is trending high on Google Trends, and I believe it was metioned on Hannity tonight. The site is a forum, and is operated by someone calling himself "Mad Hatter." I ran a "WhoIs" at Godaddy.com and the site is registered to a phony name - someone too scared to admit who they really are.

According to the entry page, the purpose of the site is to gather people who wish to crash the Tea Party. If you've been paying attention to current events you know this is becoming a concern.

The leftists are enraged that they are being defeated in the battlefield of ideas, and their newest tactic appears to be disrupt peaceful events while making an effort to portray themselves as sincere and honest Tea Party Patriots and that the way they are acting is the way we all act.

Expectations are that there will be an unusually high number of racist-appearing signs and aggressive or illegal behavior, all with the intent to get CNN, MSNBC, and the alphabet networks focused on these incidents, rather than focusing as they should on the true spirit of the events and the patriotic, peaceful attendees.

I checked out the site. At the time of this post it has seven pages of discussion threads, including everything from the "Welcome" thread, to others including one asking why posts are being deleted. There's one on the first page of topics called "Thanks crashtheteaparty.org...," which has an opening post that says:

Thank goodness for this ridiculous site! Now, if anything does happen it will be blamed on you idiots! Excellent, Left-wing thinking right here. Congratulations!

Another post in this same discussion, posted by someone named "Bagger," reads:

I just invited the 9/12 groups to come over here and play. Come on liberals....we want to play. Do you jerks have any idea how millions of members we have in the movement. You think you are going to disrupt us with pranks. We are fighting for liberty and you would have to be pretty dumb to stand in front of us. But if you must come on. We will be clinging to our guns and our Bibles and I promise never to use the Bible on you.

What's great about this is that someone from the right named "NunnayaBizness" is posting in this same thread, and returned fire by saying:

"bagger" trying unsuccesssfully to frame the 9/12 movement...see? u lefties are so simple. u underestimate the intelligence of the American people every time. so sad.

Having seen this, I'm pleased to announce that it appears this sham has been infiltrated at a couple of levels.

First, the fact that bloggers like Left Coast Rebel have discovered this pathetic attempt to infiltrate our ranks gave us access into the agenda of the leftists.

Second, we have quickly and easily shown them how pathetic they truly are. We have let them know that we are aware of them, and we have informed them that we are on to their little game.

Finally, we have shown them with posts like the one from "NunnayaBizness" that we understand their game plan, and we plan to counter peacefully - regardless of their pathetic attempts to provoke.

While I was checking out the "Why are you deleting posts?" thread, I found this wonderful video I thought I'd share with you.

The video was posted by someone named "Tea Party Negro," who said his posts had been deleted twice, "because as a conservative black man, I pose a threat to his liberal mindset.

While all of the facts "Tea Party Negro" offer in his post may not be completely accurate, his heart is certainly in the right place. Additionally, he posted a video that is well worth watching. The description of the video says the scene comes from the Tea Party Movie DVD, which is available at http://www.teapartymovie.com/.

In this scene from the Tea Party Movie DVD, black conservatives talk about the Tea Party movement. Nate, who is featured in the film, voted for Barack Obama in 2008. He says his upbringing in Detroit taught him to mistrust America because of the color of his skin. As a Libertarian with a paradigm shift and a newfound understanding of the nation he loves, he is risking the anger of family and friends by joining the march against a President's policies that would victimize the very people he loves the most. Order the MOVIE of the MOVEMENT now at www.TEAPARTYMOVIE.COM

Game on, liberals. We play for keeps.
Posted by Soloman at 8:47 PM

Stay low is something i've been saying for a while- unfortunately I don't have a blog and don't intend on putting one up. All I do is think-

Let them come for our heads-

Let us morph into different underground entities that continue to function just beyond the grasp of the larger structure. They will not find you if they try to once you've disappeared into another tactic/organization. It is a weapon of the left and we have chosen to be above it. We are not fighting for 1 political seat, we are fighting a 'war', lets act like it.

Nothing is to be taken literally, just some out of my heads onto my keyboard thoughts. I can always be wrong, but we must accept all possibilities.

They didn't do such a great job keeping this a secret. I heard about this yesterday. I am not sure when they put the site up, but conservatives know about it. I actually think I met one last night at a tea party meeting I went to. Get this:

He is a conservative democrat/libertarion, who not only voted for Obama but volunteered on his campaign. He also said that he wouldn't rule out doing it again in 12. How can someone call themselves a libertarion and not be completely appalled at Obama? It was bizarre.

Awesome work, man! Thanks for taking the time to do this tonight, I would have been there too but have guests....I'll grab an excerpt from here and link back.

I've had a lot of fun looking through that discussion board. I'm surprised it hasn't crashed.

I love the video and I've scheduled it to pop up at GNN tomorrow.

Great post, Sol. I linked to it over at the TCL FB page.
At least the Tea Party knows to keep an eye out for these losers. I think I'll go over to their site and check it out for fun.

Liberals unable to win on issues are planning to infiltrate the tea party protest in hopes of portraying them as racist.
Post and repost about this constantly, let them know we understand their game and will not play by their rules.
Post on facebook pages, blogs. Link it . GO VIRAL !
Contact media and inform them they will be reporting on the lies and racism within their own party.

I just checked out the site. It looks like the Tea Party members have taken it over. some of the comments are hilarious. Check out the "Kamp Obama" post.
Also, one of the comments gives the supposed real name of the originator (Mad Hatter) and his address. I don't know if it's his real name and address.

Excellent post, Sol. And the video is really great. I love Americans.

Nice work Sol, I don't think I could stomach going over to play right now. By the way, was Silver Fiddle stirring things up over there? He is pretty good at getting he rattled.

I also did some trolling about at this site and collected some screenshots. I saw your post via Left Coast Rebel and linked here as well.

I checked out the site- not much there, but it was nice to see TPN articulate his points although he did accuse someone of racist actions (do not know why so it is not an issue really).

Video was only interesting for 1 fact. Whoever the guy walking into the meeting was seemed like he had, for the first time, ran into someone that felt the same way he did. It is an odd thing to be a conservative and another thing to be a minority conservative where you really do have to hide. I think the sentiment that the MSM may be trying to "keep in the air" is to make us feel alone, and thus, not compelled to act. The internet has been a wonderful thing for us, and what has been allowable in the past (only due to lack of knowledge by the population) may not be the case anymore.