On the front page of the Huffington Post tonight, I found a headline reading George W. Bush To Write Memoir About "Decisions" followed by this picture: 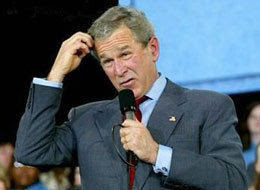 Now I'm not at all surprised, although I continue to be amazed and offended by the words of some who comment on that particular website. Last night I wrote about the time I spend on that website, and how I learn more about what is wrong with our great nation when I read the statements of those with whom I vehemently disagree. This is a perfect example of my point.

I believe this behavior stems mostly from a couple of things. First and foremost I believe the impeachment of Bill Clinton was seen by the left as a personal attack, because the left does not always think in facts; often they think only with feelings. It was an unpleasant experience for them to have their first president in 12 years, and their first decent president since Kennedy, put through the embarrassing process that he truly (and legally) brought upon himself.

Second, I believe that liberalism in general allows for and creates a less moral society. I believe I am validated in this belief by the behavior of Bill Clinton throughout his political career, as well as the treatment of 'W' by liberals in the media and in public. In the case of Clinton, a somewhat decent president acted disgracefully. In the case of Bush, a great president was said by the left to have acted disgracefully (which I will never understand).

Further proof of the double-standard on the left, and the continuation of the aforementioned trend, has been on display recently in the way they have treated Meghan McCain. Ms. McCain was made fun of by the left during the campaign - she was called a princess, a daddy's girl, and had her weight made fun of. When she recently voiced a somewhat negative opinion of Ann Coulter, she was immediately invited to be interviewed on the Rachel Maddow Show (MSNBC) and The View, and the left-leaning websites all had articles presenting her in a positive light.

This chain of events led to a segment of the Laura Ingraham radio show being picked up - and picked apart - by the left after Ms. McCain appeared on Maddow's TV show. Ms. Ingraham did a bit about Ms. McCain, and during this time she made mention of the fact that Meghan "Really wanted that slot on MTV's The Real World but realized they didn't accept 'plus sized models.' This was instantly picked up by the left. However, they presented the story as if Ingraham was making fun of McCain's weight, rather than presenting it as it really was intended - a sarcastic bit in which Ingraham was "channeling" Meghan McCain.

The point, ultimately, is that Ms. McCain has only become convenient for the left because she has something negative to say about Conservatives. As Tammy Bruce said on The O'Reilly Factor Tuesday night, Meghan McCain will be just fine if she wants to be a useful idiot for the left, and her statements may get her invited to some parties. (If anyone would understand the meanness of the left, who better than a former self-described 'classical liberal,' openly gay, feminist, pro-choice woman who once headed the L.A. chapter of the National Organization for Women). However, if Ms. McCain truly is a Conservative she will soon fall out of the good graces of the left. Her statements about how both parties need to be more moderate, however, lead me to believe that she will serve the left well for quite some time. Like father, like daughter, I guess...

So my "Hope for Change" is this: I hope the left will change its way and realize that they really need to be more respectful of everyone, not just those who meet their needs or who make them feel good. Sadly it may take the very harsh demise of Barack Obama to make them realize that every liberal isn't perfect, and every Conservative isn't a hate monger.

Posted by Soloman at 6:21 PM No comments:

The Media and Liberal Spin

Hello, and welcome to my corner of the world - a place where you can learn a little bit about what I see in the world, and how I process it. The results of those visions and that processing are, from this day forward, going to be known as "The Wisdom of Soloman."


My first little nugget of wisdom has to do with the liberal agenda, and the role the liberal media plays in the perpetuation of lies and distortions.


Last Friday (March 15, 2009) I attended a local "We Surround Them" get together here in NW Phoenix, AZ at a place called Oggi's (which deserves a big thank you). The "We Surround Them" meeting was the concept of Glenn Beck, who has recently moved to The Fox News Channel, and is having great and well deserved success. I've been listening to Beck's radio show for about two years now, and watched his last year on CNN Headline News, and was thrilled to learn he was moving.

Anyway, the reason I tell that story is because this "We Surround Them" gathering was a "call to arms" without direct marching orders - but it certainly put a stir in me that I've been needing, and I am going to begin my effort to reclaim my country right here, in my own living room, and see what becomes of it. Before I forget, Beck has his own post Friday place where we can all learn more about what is really going on in our great nation - The 9.12 Project.

Today after work I spent some time on The Huffington Post Website. I do this often; not because that website is a friendly forum, but rather because I feel I learn more about what is wrong with our great nation when I read the statements of those with whom I vehemently disagree.

The Huffington Post, if you're not familiar, is a rather "left wing" website. It's founder, Arianna Huffington, is a predisposed leftist who married a Republican in the 80's and gained access to Washington's inner circle. In 2003 she ran against Arnold Schwarzenegger in the California recall race of 2003. She has been on "The Daily Show" and "Politically Incorrect with Bill Maher" several times, has guest hosted for Larry King, and guest hosted for Rachel Maddow on the clearly left-wing MSNBC.

On this site tonight, I read an article written by Ms. Huffington entitled "What If Jon Stewart, Instead of John King, Interviewed Dick Cheney," and read what I felt was an incredible statement by one of the other "posters."


This person wrote "To get the journalism we deserve we must watch and read what we want and ignore, even complain about, what we do not."

I responded to that posting with my own, as follows:


""To get the journalism we deserve we must watch and read what we want and ignore, even complain about, what we do not."


I'd like to rephrase your statement, but let's be honest. What you really mean is -


"To get the journalism we want, we must watch and read what we agree with and ignore, even complain about, what we do not."


Furthermore, whether you agree or not, the Iraq conflict was the completion of the Clinton (and U.N.) policy on Saddam Hussein. The fact that Clinton never saw his own policy through to completion is open for eternal debate. The fact that the U.N. did not take more initiative during the U.S. invasion - well, we all know what the U.N. has recently said about the U.S.A.

Unfortunately, there were bad decisions made during the course of conflict - again, open to eternal discussion. However, it is more than reasonable to say all Americans would have a different opinion of those events had they unfolded more positively."

What happened next I found most amusing. Within just a couple of minutes, I had received replies as follows:


1) Poor thing = guess you are caught up in revisionist history too.


2) It was Bush / Cheney not Clinton- who decided to go into a pre- emtive war - no one else ! They planned the Iraq war in the first weeks of 2001. Cheney said ' the War would be short- we'd be greeted as liberators- Iraqi oil would pay for the war. - some of Bush 's comments- ' Bring em on ' ' we might have a mushroom cloud- Sadaam was involved in 9 / 11 . ' Mission accomplished ' All lies that caused untold millions to die or lose limbs They count on our poor memories- it worked in your case.

My reply to both of these was similar, so much so that the 'moderator' only allowed one reply. I was actually surprised I was allowed a reply, because I got mired down in facts that proved my point. This website is known by me and other independent thinkers as one which does not take well to the "left" being proven incorrect. Anyway - I replied:


"I recommend you take a look at this document, which is law that was enacted by then president Bill Clinton - H.R.4655, Iraq Liberation Act of 1998.


Also, this link provides a statement made by the former president -


I do not deal in revisionist history. I deal in facts."

Now the really interesting thing - to me anyway - is that I knew my FIRST statement was based in fact, even before I received a response. Once someone challenged me, it took all of maybe 5 minutes to search for the two links, post them, and wait for one to appear (remember, I'm being moderated - so they have to 'approve' what I post).

Meanwhile, if you payed any attention during the 90's and early on in the George W. Bush administration, you know as well as I that my statements are correct. However, if you've ever watched CNN or any of the "Big 3" or if you read your local cat-pan liner... er, newspaper... you know exactly where these other people get their information!

Our media - "The Fourth Estate" - is proving itself not to be the most important of them all, as was once said by Edmund Burke. Instead, they are now seemingly the most self-important, but the least worthy of respect. They are much less heroes, and much more in "Hero Worship."

So as I close this night's writings, I'd like to say just a couple of things.

First, to my family - I love you, and thank you for all that you have ever been to me. I hope as this project grows, and I become more inspired to pursue whatever has begun on this evening, you see in me everything that you ever expected I would be.

To my close friends, of which there are few but they are very dear - I hope you enjoy following my ramblings, and I welcome your criticism as well as any inspiration you may offer.

To those in the media who I do trust - Glenn Beck, Bill O'Reilly, Rush, (the nearly famous) Barry Young & Corella Michella Buffy Lee Larson (the best radio personalities in Phoenix bar none), Hannity, Medved, Malkin, Ingraham, Prager, J.D. Hayworth, Bruce Jacobs, Brit Hume, Dennis Miller, Bernie Goldberg and more... I trust you. We trust you. Thank you for your integrity, and for all that you do.