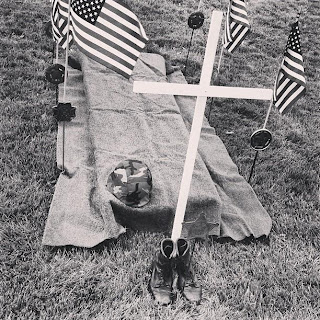 I am blessed that my work is in manufacturing, and typically the “major” national holidays are given as time off with pay in my industry. I haven’t always been so fortunate, so I am grateful for the fact that a few times a year I receive a day off with pay for nothing more than the fact that it is a holiday.

I had a wonderful, peaceful weekend, and I hope you all had the same. For me a peaceful weekend is a pretty simple thing to achieve. I’m a “cheap date,” I guess you could say, and even more so since I became a little gun shy with the Jeep after the last adventure I took cost me some serious cash. I’m getting closer to taking a weekend drive to the mountains… there’s a New Moon coming up in a couple weeks, and I think that would be a great time to camp out for a night. Away from the city lights, no moon in the sky, where I can really see the stars more clearly... it just seems like the thing to do. I’m already amazed by the amount of stars I can see from here from my home, which is in the city but somewhat in the outlying area, and I am sure it’s going to be amazing to see what I’ve been missing. I’ve got a pup tent, a sleeping bag, and one of those collapsible chairs with the built in cup holder… I just need to pick up a small cooler so I can keep my beverages and some food cold, and I’m ready to go.

Anyway, that aside… I slept in on Saturday, got in a good bike ride in the late afternoon, and then watched my Diamondbacks lose a tough game against the San Diego Padres. After the game I enjoyed a nice late evening walk through the neighborhood just north of my apartments while I let the cats have some time out on the patio, then came home and watched a few episodes of “Big Bang Theory” on the DVR. It’s a cute show, and I’ve come to enjoy catching up with it in syndication. There is some typical leftist Hollywood stuff in the stories, like the lead female Penny wearing a “Hillary 2008” t-shirt and getting a “cute shirt!” compliment from a new neighbor, and some stereotyping of Sheldon’s mother as a bit of a right-wing zealot and Bible-thumper… but if you can (as I’m learning to) look past that crap and enjoy the humor and character interaction, it’s rather well written and the actors have grown into their characters well.

Sunday I woke to a nice surprise - a phone call from my Mom, who called if for no other reason to say hello, and to check and see if a package she sent had arrived safely. I enjoyed watching the Indianapolis 500; much like the Daytona 500 and the Brickyard 400, Indy is one of those “can’t miss” races on my calendar which I prefer to watch live rather than recorded if at all possible. Shortly after the race ended the Diamondbacks game started. I worked out through the first half of the game; working out involves resistance bands, a pull-up bar used for pushups, and a thing called the “Ab Carver” that is really, really tough to use… it is getting easier to use as my core muscles get stronger, but I’ve come to realize I had really let myself go. Around the 7th inning I was done working out and was ready to get the bike out, and since the game was good and I wanted to see the finish, I set the DVR and I was off and riding. Once I got home and cleaned up I put on the end of the game (Dbacks won), then started watching the NASCAR race… after 600 miles, two red flags and a bunch of cautions for wrecks I had almost lost interest, even with the DVR to help me cut out the seemingly endless stream of commercials. Perhaps it is understandable that NASCAR maintains the tradition of the 600 mile race on Memorial Day weekend, but I for one am glad that they have cut down the length of some of their other races.

This morning I woke up and enjoyed a couple hours of peace and quiet. The cats were outside enjoying a beautiful overcast morning on the patio; I had some oatmeal with strawberry slices… why didn’t I learn to like that at a younger age??... some (turkey) sausage patties and a glass of orange juice… and quiet. Some of my favorite moments happen when I wake up early on the weekends, listen to the chirping of the birds, and enjoy as my cats watch the ‘show’ that is nature, in the tree right outside my apartment. I’m kind of lucky, I believe, in the fact that I’ve come to appreciate what others may not understand. I look forward to the day I can get out of this apartment and own a home, don’t get me wrong… it amuses me, though, when people ask me how I can have four cats in a one bedroom apartment, and why I don’t get out and do more on the weekends. The need to get out and do stuff is not such an overwhelming feeling in me… I have, and I will again. Of that I am certain. And the cats… there’s so much love there… I know for certain that if not for me, they would not have had a chance… and I know for certain that without them, I’d not be the man I am today. After all, it takes a lot of patience and understanding to get four cats to share such a small space without tearing each other to shreds…

Not just on this day, but every day, I am so grateful to those who came before us, who gave their lives so I can wake up on the occasional Sunday morning, or on a Memorial Day Monday, and enjoy the chirping of the birds and the tranquility of a peaceful nation that is not burdened with the devastation of war within its own borders. I am able to earn my fair wage for my honest work and (for the most part) do with that income as I see fit. I have the right to praise my God, and others have the right to refuse God, and we are treated equally under the laws of this great nation. And thankfully, still, without fear of retribution, we can all speak our mind about the state of leadership of this nation, be it good or bad… and every so often we have the opportunity to affect change, with a vote for those we believe will better protect our values and our rights.

I believe there are some people who are lucky enough to live in this land, where we are free from real tyranny, who sometimes forget how lucky we are. There are some who have not been so lucky, and there are some who paid the ultimate price so we might be so blessed. So many people today ‘need’ so much… we’re such an instant gratification, “gotta have it” society… I feel like sometimes even I can succumb to this, with my DVR and my high-speed internet that I wouldn’t want to be without… but the best times in life, the ones I really wouldn’t want to be without, are those with nothing more in front of me than the little friends with whom I share this humble little home, the sounds of the chirping birds, and the beauty of the sun rising on another magnificent day.

A doubleheader today… The Diamondbacks won the first of two against The Texas Rangers, who are currently owners of the best record in baseball. It’s tied at 2 in the bottom of the 4th inning of Game 2 as I close this… I love National League baseball. Growing up in Cleveland and having watched the American League with the DH, and now seeing the strategy and coaching involved in the game where pitchers actually are a complete part of the game… I’ll take a double-switch and the challenge of deciding whether or not to have the pitcher hit in certain times of the game every day of the week, thank you…