Out Of Control Government

File this one under "Are you kidding me?"

According to this article from The Washington Times, Vice-President Biden is somehow able to get away with charging rent of The Secret Service, who are entrusted with the responsibility of keeping him safe.

Since April, Mr. Biden has collected more than $13,000 from the agency charged with protecting the lives of he and his family, for use of a rental cottage adjacent to the waterfront home he owns in a Wilmington, Del., neighborhood.

Mr. Biden, listed not as vice president in federal purchasing documents but as “vendor,” is eligible for up to $66,000 by the time the government contract expires in the fall of 2013, the records show. 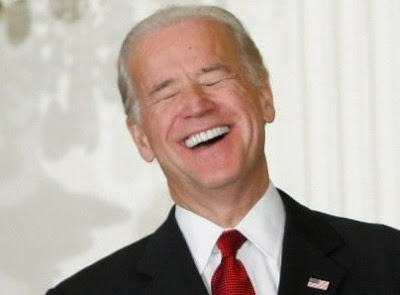 As Seen At A Used Book Store

Went used book shopping a couple of weeks ago. 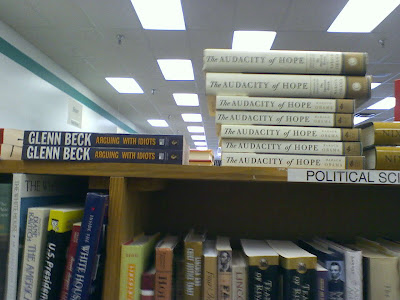 Interesting to see whose books are piling up (and perhaps not selling?) in a used book store. Also fascinating these two ending up next to each other.
Posted by Soloman at 6:45 PM 6 comments:

An open letter to President Obama.

President Obama, I believe you have an excellent opportunity to show true leadership in this time of crisis. You are our President, and it is your job to lead. And we must be in a crisis; you keep saying so.

I would like to offer an idea to you, sir. I would like to propose to you a way you might score major political points and shut some people up, all at the same time.

You, sir, have the opportunity to seriously put some smack down on the likes of Glenn Back, Rush Limbaugh, Sean Hannity, and perhaps some others including me.

Sir, if you do this one thing, I will believe that you are sincere in your belief system.

President Obama, I believe you should donate a large sum of your personal wealth to the government.

Maybe if you wrote a check for $5 million. We can figure out a number, the details are not important at this moment. It is important and you need to act fast – remember, we’re in crisis and must act now. That’s what you keep saying. Anyway - you get the point. Lead. Set the example.

While I know that it doesn’t fit the bill through the exact means we normally do things, a personal donation to the government of some magnitude would absolutely be the right thing to do if you truly believe those who “have” should share the sacrifice and you believe the government is the correct way to redistribute the wealth.

While you’re at it, perhaps you might make a contract with the government, and promise to donate a percentage of your future income to government. I mean, come on… you’re going to make a lot of it. Look at President Clinton if you’d like an example of what sort of career path you might be on. And truly, you’re probably going to make a lot more than him. After all, you won a Nobel Peace Prize. And you are America's first Black President. I mean besides President Clinton. Whatever. You get the point.

I know that technically makes my suggestion two things, but work with me here. After all, this is about our future, isn’t it? And clearly government knows best what to do with your money since your economic belief system is based on the theory that the system needs to do for the people, and that everything should be fair. Equality, if you will.

Certainly your money will be used more efficiently and for more common good if you spread the wealth around through taxes, since you have so much money and are certainly going to be extremely wealthy for the rest of your life.

By the way sir, I would like to offer you some advice. Do not own a corporate jet. Ever. In the words of another President (one conveniently named Bush) it "Wouldn’t be prudent” after all the flak you’ve given corporate jet owners. Just sayin’.

I can tell you with great certainty that all the aforementioned talk show hosts have suggested at one time or another that perhaps those who believe in redistributive government and have the means should do exactly what I suggest here in this proposal, but that those with that wealth and your belief system are really hypocrites who will never consider such an option. This is your moment to show exactly how wrong they are, and how committed you are to government as the solution to our problems.

A concerned citizen who did not vote for you but believes you have an excellent opportunity to, as Nancy Pelosi said, "Save life on this planet as we know it today."

Follow me on Twitter if you’d like. I am having fun learning to offer brief commentary at random times. Could be interesting!
Posted by Soloman at 6:29 PM 6 comments: